Be One of the First 313 to Own this Ground-
breaking, Limited-Edition Seerah Artwork 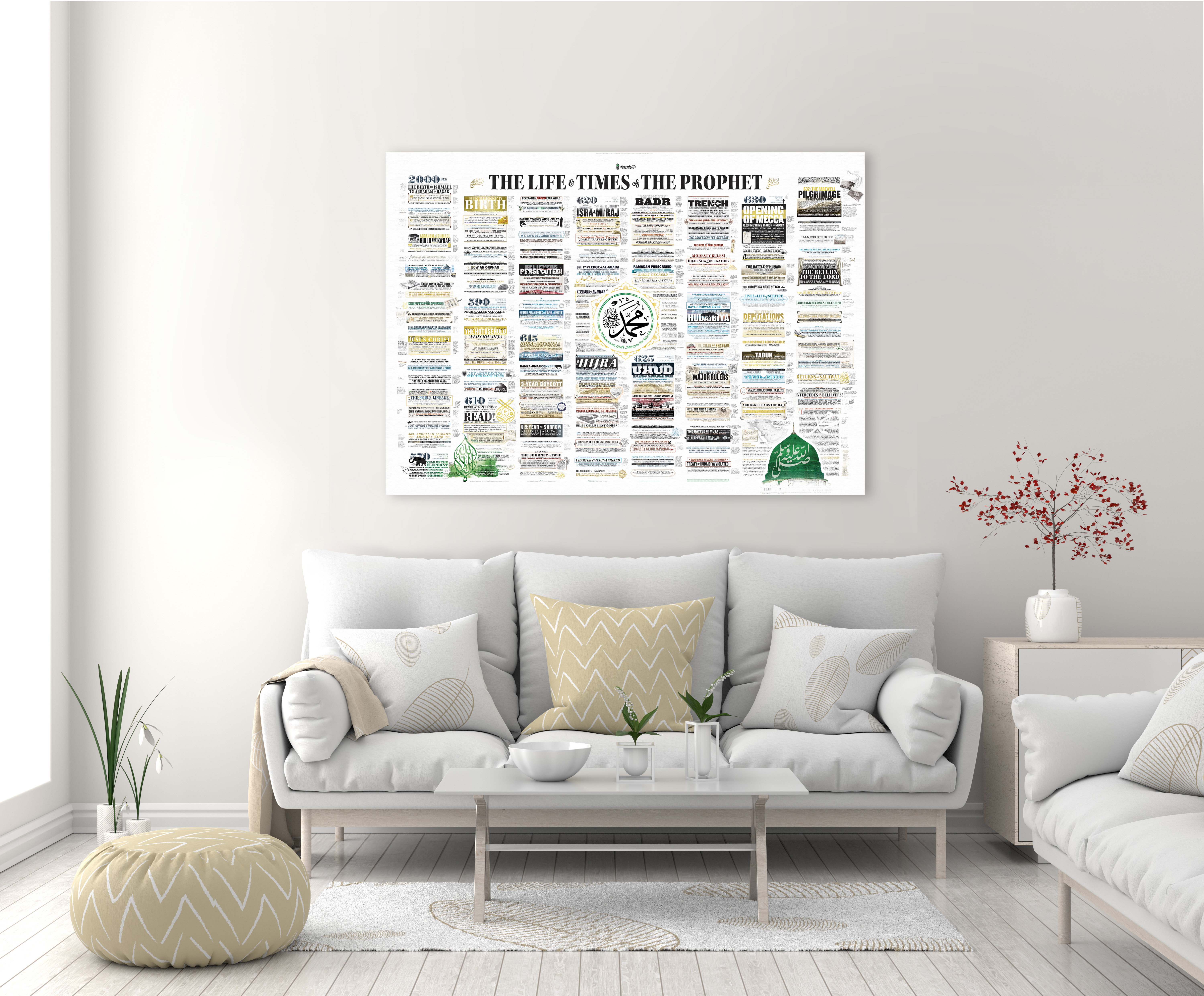 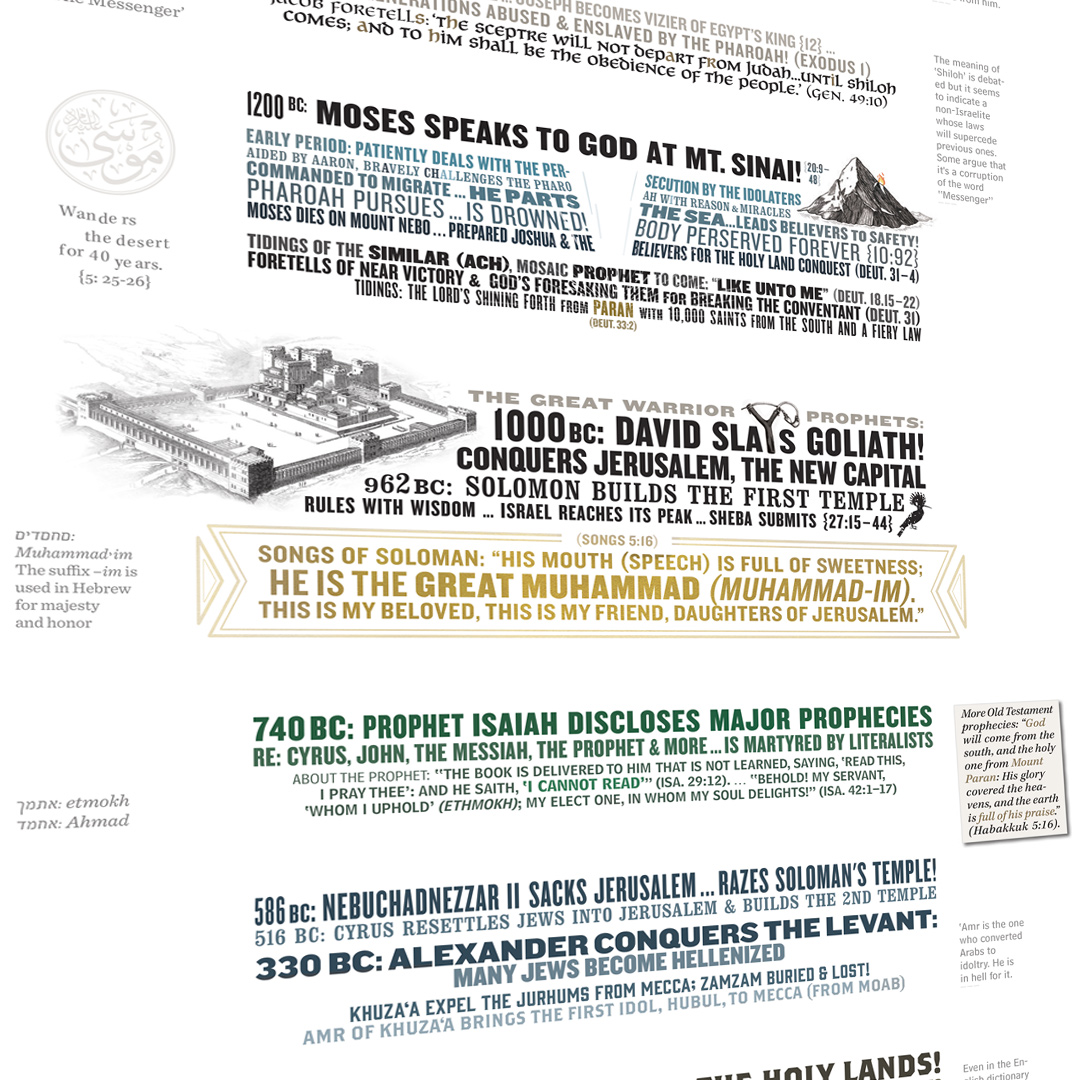 Since launching Irada over 9 years ago, we have been blessed to work with many organizations on very special projects. But none of these projects have been more dear to us than this new project we are announcing now. Over five years ago, we started working with a new company (website launching soon, inshallah) on an unprecedented Seerah artwork project, the like of which had never been attempted before.

​Deeply Rich: About 20x more details than ANY seerah poster ever made, in any language.

Traditional Spirit: Based on traditional Muslim sources and designed with spirit of instilling love of our Beloved Messenger (salla Allahu alayhi wa sallim).

Contextualized: based on hundreds of Seerah lessons by dozens of Western Muslim scholars, uniquely written and designed for English audiences.
“This is an excellent, engaging, and thoughtful presentation of the Life of the Messenger of Allah (peace & blessings be upon him) and some of its key lessons. Perfect for anyone or any family seeking to connect to the Prophet (peace be upon him and his beautiful life.” 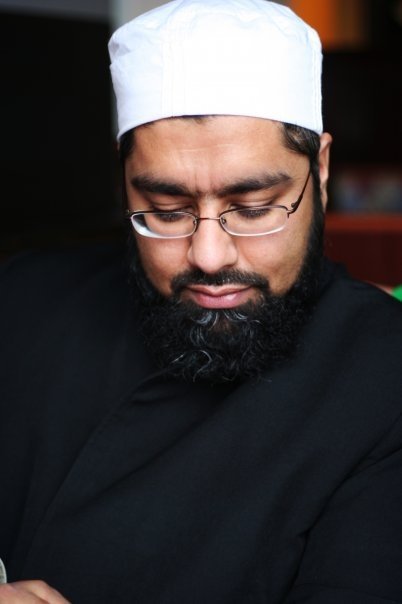 “A stirring and priceless treasure-trove of reliable knowledge about God's most beloved messenger.”
—Shaykh Hamza Karamali

After 74 months (over 2,200 days) of research and, literally, thousands of design iterations, we are excited to announce that they will launch their website and will start publicly taking orders after a few months, insha'Allah.

But before doing so, they agreed to allow our customers a special honor.

We have been given exclusive rights to make the special first edition available only to Irada customers as a reward for your support which allowed our artists and staff to put in so much time and energy into this project.

This will be a special, very limited, 313-print gicleé canvas edition. After these first ones sell, no more will be available until the official launch later on this year. 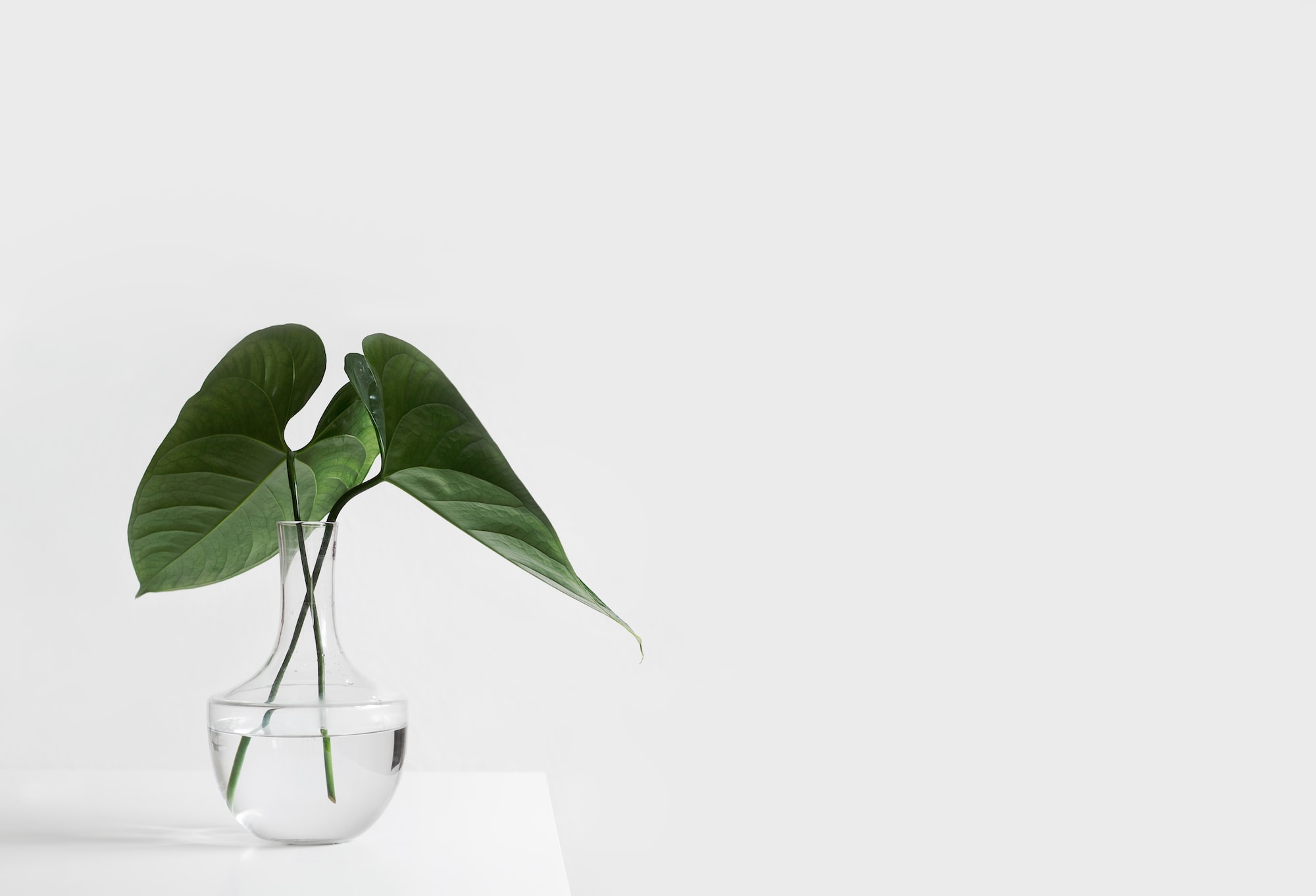 We are excited to announce that we have opened up sales for this special first-edition version which we have nicknamed, “The Badr Edition”, in honor of the 313 Sahaba who participated in Badr.

Because there will only be 313 prints made available at first, we wanted you to be one of the few people to own it.

“This Seerah artwork propels the concept of ‘Islamic art’ to innovative heights. Bold and modern in aesthetics, it is bound to draw the interest of all ages and religions. However, it’s real appeal lies in its sheer scope and meticulously organized material concerning our beloved Prophet ﷺ, which means it can be utilized in a myriad of ways and settings, and I hope, renders it a powerful and interactive tool for learning about the life and teachings of the greatest human being to have lived on this earth.”
–Shaykh Jamir Meah

• Parents: Start your kids on a life-long journey to Allah by instilling lessons from the Seerah and love into their lives. Let this artwork be the daily visual cue to spark spark gratitude and awe.

• Converts: Having trouble discussing Islam with your family? This artwork has been designed to pull in non-Muslims and be conversation starters, especially for those of Christian or Jewish backgrounds. It's a perfect artwork for your guest room … let it be the conversation starter.

• Masjids: Do you have many non-Muslim guests? Do you want to inspire your jama'at with lessons from the Seerah. This artwork will allow them to visualize references in your lessons and khutbas as they walk in and out the masjid.

• Islamic Schools: Inspire your kids and spark a level of curiosity into the hearts and minds of our Muslim youth.

“This is a beautiful piece of Islamic art work that would make sense in any modern home. The lines are clean, the colors are sophisticated. At first glance, it is striking. One notices it upon entering the room. It draws the visitor in and remains the focal point of conversation. The longer one spends with it, the more one sees, learns, and appreciates. The layers of graphics painstakingly designed and the events of the seerah carefully authenticated are invaluable. It is a visual teaching tool for young and older Muslims. At the end of a viewing, one comes away with a sense that this is a collection of artifacts – hundreds of newspaper clippings –lovingly preserved and presented to remind us all of the greatest events in history.
—Nausheen Akhter

If you have any questions or concerns, please email us or WhatsApp us here:

The idea at first seemed simple enough: create a content-rich seerah artwork in a timeline format that uses typography as the primary means of displaying different events during the blessed life of the our Beloved Prophet (salla Allahu alayhi wa sallim).

Basically, the aim was to create the first, deeply-rich Seerah artwork in history.

We've seen many Seerah artworks in various languages produced throughout the world.

Without exception, all had limited themselves to 30–60 main events written with small type and using small imagery such that you could walk by it a hundred times and wouldn't stop to take a look once.

Instead of serving its purpose of making you stop and reflect on the Seerah, they often became ignored posters, left on some random wall to collect dust.

We all felt that our Beloved Prophet (salla Allahu alayhi wa sallim) and his Blessed Ummah deserved something more than that.

The challenge presented was to create something using bigger and bolder type and imagery that captured 4–5 times the amount of details in an engaging manner.

It would have to bring you there as if you were experiencing it: the shocks, pains and joys felt from these world-changing events as their news were reverberating first through Mecca, then throughout the Peninsula, then the worlds around them.

“The first time I saw this amazing Seerah artwork, I was speechless. As a teacher and researcher of the prophetic biography, I began to scan and scrutinize the canvas and realized that not only was every major event included, but many vignettes and lesser-known details were woven in without seeming dry.

For the first time, I saw art come together with knowledge in a deep way. The work can only be described as magisterial and it should grace the walls of every home, mosque and school, because it breathes the words: “Muhammad is the Messenger of Allah (peace and blessings be upon him).”
—Ustadh Abdullah Misra

How Quick Can We Design It?

We were asked early on if this could be completed quickly.

We simply balked at that.

A quickly designed version would simply entail paying a researcher to put together a quick bullet list and handing it off to a designer with a short deadline.

We simply couldn’t bring ourselves to do that. Not if we want it to be a work of excellence, something that the Prophet (salla Allahu alayhi wa sallim) specifically called all Muslims to.

It would allow no time for experimenting and serendipitous discoveries.

It would not allow years of editing the content with painstaking effort and attention to detail.

It wouldn't allow going through every single line and carefully selecting the best wording, font, sizing and spacing, going through dozens of iterations on every line, making sure each line was given the attention and care it deserved.

We wouldn't allow us to go through hundreds of Seera lectures and steadily try to instill into the artwork the years of work and striving that went through those untold number of lessons and the spirit of their efforts.

And it wouldn’t allow time to reflect on the events in the Seerah and how to draw lessons in one’s own life, findings parallels to guide one through the ups and downs.

What would be the point of doing such a work if it wouldn’t give us time to making it something personally profound for us.

A rushed job never could allow for this.

We personally never liked rushing regular artwork. How could we rush this?

Such an ambitious artwork required taking a long-term outlook where thousands of hours of studying, listening, reading, writing, editing and designing were all feeding off each other.

This could only be done by carefully mixing these vital ingredients and letting them simmer and over long periods of time, with each one slowly and steadily complementing and enhancing to the flavor the others has to offer.

Be One of the First 313 to Own this Groundbreaking, Limited Edition Seerah Artwork.